The player is the character that can be controlled in Minecraft. The two default player skins are known as Steve (a name suggested by Notch as a joke[1] and confirmed on the 'Profile' page near the section that allows you to change your skins) and Alex, with all unchanged skins being split between the two default skins. In the End Poem, after beating Minecraft you are called a player.

There are two default player skins, typically known as Steve and Alex, assigned to each player based on their account ID if they do not use a custom skin.

Steve has dark brown hair, dark skin, nose and mouth, and blue eyes, with a light blue shirt (un-tucked on the left hand side and in the back), a pair of blue jeans, gray shoes, and 4px arms.

Alex has long bright orange hair hanging to the left side, pale white skin, and dark green eyes, with a light-green shirt (un-tucked on both sides, and a dark green belt wrapped around it), a pair of brown pants, grayish boots, pinkish lips, and 3px arms.

Both player skins are intended to be generic representations of a human being,[2] although the player's skin can be changed.

In the Console Edition, the player's default skin can vary from Steve or Alex to seven other player skins, as listed here. Multiple skin packs are also available for purchase on the Xbox Live Marketplace, the PlayStation Network or the Nintendo Network.

In the Pocket Edition, you can choose between Alex and Steve like in the PC version, which will set both the skin and the model for custom skins. However, the Pocket Edition also allows the usage of skin packs, each of which has a selection of free skins. Some skins can be purchased as DLC.

In the Console Edition, there are 8 defaulted versions of both Steve and Alex for the player to use, with each of the two having a default, boxer, cyclist, tennis outfit, country, prisoner, tuxedo, and athletic suit. The various skins change not only the outfit, but also tend to change the skin, eye, and hair color. The Console Edition also contains additional skins using skin packs, which can be purchased as DLC. They feature many characters other than Steve and Alex, who are often from other video games.

The player has 10 full hearts or 20 health points. One full heart represents two health. When the player's hunger bar is at 18 (

× 9) or higher, their health will slowly regenerate by 1 (

) every half second. The hunger bar depletes faster when the player does things like sprinting, jumping, attacking mobs, and mining, and it can be refilled by eating food. If the hunger bar is at 17 (

× 8.5) or lower, the player will not regenerate health unless in Peaceful difficulty (or under the effect of certain potions). If the hunger bar is down to 0 (

), the player will start starving and losing health. On Hard difficulty, starvation will kill you. On normal difficulty, it will bring you down to 1 (

). On peaceful difficulty, the health bar will recover regardless of hunger but will still take starvation damage, and the hunger bar will not lose any points, even when under the effect of hunger. Notably, if the player is killed, right after the death, the death screen is shown. If you exit, and re-enter, the same screen will show up.

The player is able to sprint,[3] draining the food bar considerably (10×) faster than usual while doing so.[4] The player sprints approximately 5.612 blocks per second, as opposed to the regular pace of 4.317. The player can jump four blocks horizontally when sprinting. The player cannot sprint if the hunger bar is at 6 (

Sneaking is a feature activated by holding the sneak key (default is ⇧ Shift). Sneaking prevents players from falling one or more blocks, making it highly useful for building horizontally outwards over empty space. If you are past the edge of a block and you stop sneaking, you will not fall off of that block. Additionally, the player can still dismount blocks while sneaking by jumping over the block's edge.

The maximum height a player can jump without the "jump boost" effect is about 1.252 blocks.

Experience points (XP) can be gained via experience orbs when killing mobs or mining certain minerals. The current level is indicated by a green number above the HUD, and the experience points can be used to enchant weapons, tools or armor with different useful attributes and skills (see enchanting table.) Anvils require experience to use.

The level increases by obtaining enough experience points. All levels and experience are lost upon death, but can be partially restored by picking up the experience orbs at the place of death.[5]

Experience is also obtained through activities such as fishing, animal breeding, trading or smelting.

Players in game are referred to by a username, which was chosen by the player upon purchase of Minecraft. This username is used to target the player with commands and differentiate other players. The username must be 3-16 characters. Players can also change their username, but only once every 30 days. The console versions use gamer tags or PSN names. Pocket Edition users can choose their username and change it unlimited times, or sign in with an Xbox LIVE account.

Users can change their character's skins; this can be done on the Preferences page of Minecraft.net by uploading a PNG image file, which will then replace the default skin. Players will also have the option to have three or four pixel wide arms on their character model.

The Console Edition has a separate default skin for each player. The ability to change that skin is available using the Change Skin option in the game. People who already have the removed skin packs can still use them and even re-download them (so they're still being hosted). If the removed skin packs are redownloaded on someone else's console they will become available to any profile on that console (provided the skin pack doesn't have a demo version to default back to).

In the Pocket Edition, the player can change the skin by opening the settings from the main menu and going to the skin settings. The two default skins are Alex and Steve but you can get your own skin by the "Custom" button. 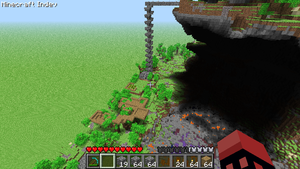 The armor bar as it appeared before the Adventure Update.