This article is about the computer edition. For other editions, see Version history (disambiguation).

1.12, the first release of the World of Color Update[1], is a major update to Minecraft. This update introduced a more vibrant color palette, a new crafting system, hints for beginners, glazed terracotta, concrete, colored beds, illusioners, and parrots. It also replaced achievements with a customizable and more powerful system of 'advancements', and introduced a new system for working with collections of commands, called 'functions'. 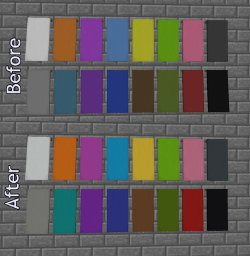 A comparison of banner colors before and after 17w06a. Image by Jeb.[6]

1 issue fixed
From released versions before 1.12

52 issues fixed
From released versions before 1.12