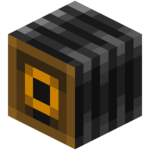 The camera is an entity that is capable of capturing and storing images. In the Education Edition, it works together with the portfolio item to create collections of pictures.[1]

In the Education Edition, it can be given with the /give command.

In the Education Edition, using a camera from one's inventory will take a first-person screenshot. It may also be placed, creating a camera entity that can track the user, and take pictures from the camera's perspective.

A camera will do nothing in the Pocket Edition.

At the Minecraft Pocket Edition panel at MineCon 2012, as well as one of Jbernhardsson's livestreams, it was stated that future plans include trying to have a proper use for cameras, perhaps an easier way to take screenshots and share them with others.[5] In the BlockTalk Q&A, the camera was briefly mentioned as part of a broader "sharing" theme planned for MCPE in the future.[6]

Issues relating to “Camera” are maintained on the issue tracker. Report issues there.