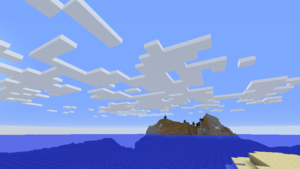 Some clouds on fancy graphics 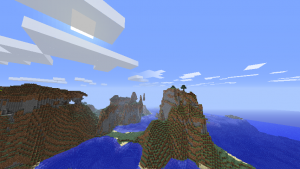 The same clouds during different time and weather conditions.

Clouds appear as large white structures, whose appearance will vary, depending on the graphics settings used:

Fancy: Clouds appear as approximately four-block-tall, semi-transparent, 3-dimensional prisms. At night they turn a shade of blue and become more transparent. Their smallest horizontal dimensions are 12×12 blocks wide. They are similar in appearance to real life stratocumulus clouds.

Fast: Clouds take on the appearance of flat, opaque planes. They have no daytime/nighttime rotation. Their smallest horizontal dimensions are 8×8 blocks wide. Fast clouds in Pocket Edition are also opaque, but remain in 3D. Their flat appearance is similar to real life cirrus clouds.

In the Console Edition, clouds consist of 3×3 block "sections", which form the same pattern of clouds found in other editions.

Clouds only appear opaque from below; from above or inside the clouds, they will appear transparent. The sun and the moon will always appear visible through the clouds from below, even if there is a solid object above the clouds (such as a mountain or a building) that would normally block its view.

The appearance (shape, color, etc) of clouds can be modified by accessing textures/environment/clouds.png. The file can be resized to any size, meaning it would be possible to have a different cloud pattern each day.

Clouds will always float westward at a height of y:127; in this way, they can be used by the Player to determine direction and altitude, respectively. They are not interactive in any form, and will clip through all structures, including mountains and player-made creations. Unlike in real life, clouds themselves will not produce precipitation, meaning it will continue to rain or snow even above the cloud layer.

Clouds are not procedurally generated, and are a client-side feature; on an multiplayer server, the position of clouds is subjective to each individual user.

Clouds can be disabled by toggling the "Clouds" setting to OFF in the Options menu.

Note: This video is outdated, as clouds can now be switched to Fast and Fancy, independent of the standard Fast and Fancy settings.

Issues relating to “Cloud” are maintained on the issue tracker. Report issues there.