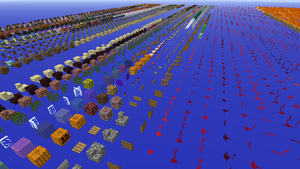 The world generation in debug mode

This article is about the world type. For in game debug screen, see Debug screen.

Debug mode selected; note that all of the other world settings are now missing.

To select the debug mode, hold the ⇧ Shift key while clicking the "World Type" button in the world creation menu. Debug mode will then be the world type directly after Customized, and just before Default.

Upon selecting debug mode, the "Bonus Chest", "Generate Structures", and "Allow Cheats" options are removed from the menu. The game mode is set to Spectator, and the difficulty is locked on peaceful; however, /gamemode and /difficulty will work as usual within the world.

Debug mode contains all Minecraft blocks, in all of their existing block states, organized in a single world. The world will update automatically to include any new registered block IDs that are added. Therefore, this mode is useful not only to Mojang developers, but also to creators of resource packs and mods.

The block grid is approximately 144×148 in size, occupying the +X,+Z (southeast) quadrant, although the barrier floor extends past the grid in all directions to the world border. Blocks are sorted in a grid spread across an altitude of y=70, with a barrier floor at y=60. Other than the barrier floor, the remainder of the map is empty.

Starting at 0,0, the blocks are arranged first in rows of 74 block states from north to south, then in 72 rows from west to east, with an additional partial row of 61 states, following first the numerical data values of the blocks, then the block state names and values in alphanumeric order. There are 5,359 unique block states. Every block state generates only once. 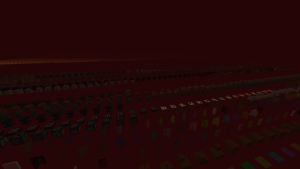 View of the Nether debug world 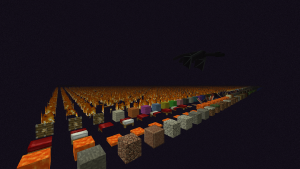 View of the End debug world

If a Nether or End portal is used, the player will spawn in a Nether version or an End version of the debug world, respectively. The sky, light level and other properties will remain appropriate to the dimension.

In the End, the ender dragon and its ender crystals will still spawn, although the dragon cannot break or interact with blocks. If the end portal is used in the End, the end poem and credits will appear as normal. If using an ender pearl to utilize the end gateway portal, the gateway teleports the player, but in keeping with debug mode world generation, no outer islands nor a returning gateway portal will generate.

It is impossible for the player to break any block, even in game modes in which they otherwise could. Likewise, placing blocks is impossible, and the /setblock, /clone and /fill commands cannot be executed.

Any block whose interactions do not change its block state can still be used (including chests, beds, cake, etc). Although a block's state cannot change, its block entity data can change, either through normal player interaction or with the use of the /blockdata command.

These unique properties of debug mode can cause certain blocks to behave in unexpected ways:

Issues relating to “Debug mode” are maintained on the issue tracker. Report issues there.

Note that any bugs relating to using other game modes than spectator are resolved as invalid due to the fact that the world type can only be legitimately accessed in spectator.