This article is about the items that drop from entities and blocks. For drops as in falls, see Fall Damage. 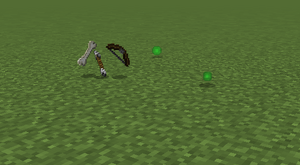 Typical drops from a skeleton: experience orbs, an arrow, and bones.

Drops are items which appear when mobs and some other entities die. There are 5 basic types of drops: common drops, uncommon drops, rare drops, equipped items, and experience orbs.

Common drops may occur whenever a mob dies, and appear at the location of the mob at the moment it receives the killing damage. Most mobs have particular items which they may drop when killed. Some common drops, such as leather, don't always drop, but have a large chance (at least 50%, depending on the drop range) to do so. Some common drops, such as blaze rods, don't drop at all if the mob was not “killed by the player” (same rules as for experience orbs).

For each of these items, there is a random (uniform) distribution of numbers of that item it will drop; this is called the item's drop range. For example, a cow will drop 0–2 leather items and 1–3 raw beef items. Since the range for leather includes 0, there is a ⅓ chance of no leather being dropped.

If a baby animal dies, it will not drop any common drops.

When mobs are killed with the Looting enchantment, the effect on their drops depends on the drop. There are three known behaviors:

The Looting enchantment increases the chance of an uncommon drop by making another attempt at dropping the item if the original attempt failed. The success chance of this second attempt is ½ for Looting I, ⅔ for Looting II, and ¾ for Looting III.

Rare drops occur in addition to the common drops. Unlike most common drops, they only occur if the monster is killed by a player. Most rare drops can also be obtained by other means. Rare drops are always a single item, not multiples.

Rare drops have a 2.5% chance of occurring when a monster dies. Using a weapon with the Looting enchantment increases the chance by 1 percentage point per level (up to a total of 5.5% with Looting III).

Αρχείο:Screencap.PNG
An enchanted bow received from a skeleton's drops

When killed by a player, a monster can drop equipment and armor that it spawned with. Each piece of equipment the monster was spawned with is dropped with an 8.5% chance, except pumpkins and jack o'lanterns, which have a 0% chance. This value is determined by the mob's HandDropChances and ArmorDropChances tags. The Looting enchantment increases this chance by 1% per level (up to 11.5% with Looting Ⅲ, and 3% for pumpkins and jack o'lanterns). This means it is possible for a monster to drop more than one piece of equipment upon death.

There are also some equipped items which are guaranteed to drop:

Experience orbs only drop if a mob dies less than three seconds after being attacked (melee, bow, snowballs, eggs, and potions causing instant damage) by a player or by a player's pet wolf, though not by a player-activated dispenser. Their total value will always be the specific amount of experience granted by killing that mob. They are also dropped from a thrown Bottle o' Enchanting. Collected experience accumulates into levels, which can be used for enchanting.

Experience orbs are similar to items but not the same. Unlike other drops, experience orbs appear at the location of the mob's corpse at the moment it disappears in a puff of smoke. Experience orbs will move towards nearby players.

Most blocks drop themselves when broken. All special drops from blocks are listed below. "Silk Touch" column indicates if the block can be collected using the Silk Touch enchantment.