An end portal is a naturally occurring structure that is used to travel into the End which can only be found in strongholds.

In survival, the player must venture to a stronghold to activate a pre-existing end portal. However, in creative, the player can build an end portal. The player needs 12 eyes of ender, and should construct a ring of portal frame blocks that encloses a 3×3 square, and use the eyes of Ender to activate them.

End portals are found within the portal room of a stronghold, hanging horizontally over a pool of lava, with a staircase leading up to the portal. A silverfish spawner sits in the staircase. Some of the portal frame blocks already have eyes of ender in them (usually 1-3), while the rest do not.

Stepping into an activated end portal immediately opens up a loading screen, and transports the player to the End - this leaves no time to back out, unlike the nether portal while in Survival mode. Upon entering the End, a 5×5 horizontal platform of obsidian is generated centered at block coordinates (100, 48, 0), and the player is placed on top of it (100, 49, 0, towards west)..

Entering an end portal does not reset falling velocity. If you have fallen far enough to kill yourself before hitting the portal, you will be transported to the End and die on arrival.

The black portal blocks emit a light level of 15, which is as powerful as glowstone and is the brightest light level there is. It only takes one block of portal to teleport to the End. Through the use of the /setblock and /fill commands, you can place these portal blocks anywhere, and they will still function as if they were a complete portal.

Activating the end portal will destroy any blocks located in the center 3 × 3 square, where the resulting end portal blocks will be. They will even destroy bedrock or another end portal frame. It will destroy fluids, though if the source block is not also removed, then it will immediately flow back through. If an exit portal is generated on a spawner, the fire particles will still remain. The destruction of the blocks does not make any sound, and applicable blocks do not drop as resources (exceptions being the top part of a door or the extended part of a vertical piston, which both destroy the whole object and drop them as resources), and events sometimes triggered by block destruction will fail to occur: TNT will simply disappear without detonating, and Monster Eggs will fail to spawn a silverfish. However, containers will all drop their contents. Mobs (except the wither and ender dragon) will enter the portal similar to the player. If the player rides a minecart into an active end portal, the player will only enter the End when they have exited the minecart. 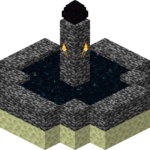 The exit portal always generates at X=0, Z=0, Y=(Terrain's Surface) and remains deactivated until the ender dragon is killed. It looks similar to the end portal but differs in its design. Instead of a frame of end portal frame blocks, it has a 7-block wide bowl-shaped frame of bedrock, and a central pillar of bedrock with a torch on each side, topped with a dragon egg. There are 16 end stone blocks, one under each outer bedrock block, and if mined they will regenerate when the Ender Dragon is defeated or respawned.

The portal is made up of the same block and block entity as the End portal.