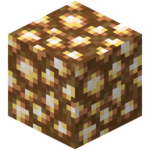 This article is about the block. For the dust, see Glowstone Dust.

Glowstone is a light-emitting block that appears in the Nether.

When broken without a tool, or with any tool not enchanted with Silk Touch, a glowstone block drops 2-4 glowstone dust, or more with a Fortune tool (but never more than 4). 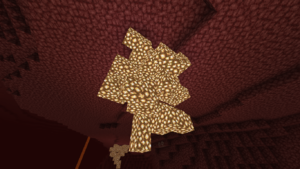 A naturally occurring vein of glowstone in the Nether.

Glowstone only occurs naturally in the Nether, where it generates in coral-like clusters on the undersides of netherrack.

Villager clerics will sell 1-3 glowstone for an emerald as a third tier trade.

Glowstone blocks emit a light level of 15, the brightest possible light level in the game. They emit the same amount of light as sea lanterns, jack o'lanterns, redstone lamps and beacons.

When placing redstone on a glowstone block, being a transparent block, signals can pass from one block to another diagonally. Redstone wire, even though it may appear to connect up the side of a glowstone block and to the wire portion on top, will not send a redstone signal down the glowstone block. This makes glowstone effective for vertical diodes, logic gate designs and space-efficient instant vertical redstone.

Note that upside-down slabs can be used for the same purpose, and are easier to obtain.