This article is about features mentioned by Mojang developers. For features that are currently being added, see Planned versions.

Since the beginning of Minecraft's development, there have been a number of features that were mentioned by Mojang AB developers. These features are either currently planned for the next update, but have not yet appeared in a development version, or have simply been dropped or forgotten about.

Note that this page only documents features that were mentioned but are not yet in the game. Features in development versions are described on the parent version page.

These features had been shown by a Mojang staff member, but either had no further development or were canceled shortly after. 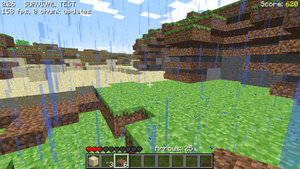 Before stone slabs were added to 0.26, Notch ran a test of dirt slabs. In the test they replaced dirt blocks, so that dirt surface without grass was half a block lower than grass. However it made a mess of the sides of cliffs and underground. They were never added to the actual game and were only mentioned once.[1] They replaced all dirt blocks and did not grow grass on top. 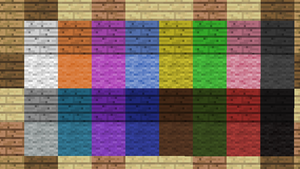 Dinnerbone asked Twitter how they would feel about colored planks.[2] He announced the results as being, "30% 'please no', 80% 'yes please'. Yes, that's 110%. I don't even know."[3] Despite this, he canceled the idea and instead added hardened clay, which can be dyed. The dyed planks were abandoned after Dinnerbone realized they would require slabs and stairs of each color too. However, each tree type has their own color plank. This includes stairs, slabs, doors, fences and fence gates. However, they are not dyed, just simply the color of the appropriate tree.

Lanterns were crafted blocks originally planned to be added in the Halloween Update. However, they were delayed due to lack of time and were going to be implemented in a future update.[4]

With the addition of the lantern, torches would flicker out and need to be re-lit with flint and steel. The lantern would serve as a permanent source of light. According to Notch, when the update would occur, all torches placed on the map, in the inventory, and in chests prior to the update would be converted to lanterns. To do this, the lanterns would use the (former) block ID of torches along with a re-skin.

On January 13, 2011 Notch claimed that lanterns were "postponed",[5] and added on January 20 that he was "not sure" when they would be implemented.[6] Notch announced on November 18, 2011, at the Mojang Panel at MineCon 2011, that lanterns would not be added to Minecraft due to large negative community response towards the effects the new item would have had on torches. Instead, other types of lighting would be added,[7] such as redstone lamps and glowstone.[8]

The Lectern was an old project of Dinnerbone's. It was meant to be a stand for books so you could easily read them. He was well on his way to creating it when he encountered problems and scrapped the idea, but mentioned that he might pick up work on the lectern in the near future.[9] Dinnerbone stated in his Reddit AMA on December 18, 2013 that he had revisited lecterns but scrapped them again as "something about them just didn't feel right".[10]

The Sky Dimension was a planned dimension in Minecraft, intended to be the opposite of the Nether. It was ultimately replaced by the End.

Fish were a passive mob that Notch showed interest in adding. In the Halloween Update, Notch said he would add fish.[11] However, they were only added as an item. There is no coding for a fish mob in the game itself, nor is there a model that currently exists. Despite being two years since the mob was first mentioned, Jon Kagstrom has stated that he is planning to add fish as a mob.[12] Notch states in the reference the 'ability to catch fish' which is already implemented. Nothing says anything about adding a model. During Notch's AMA on Reddit, when asked about what happened to his plans of adding fish as a mob, he responded, "Oh yeah, the fish!"

Audio loops have not yet been added to the game, but may be implemented to play when the player is in a specific location (In caves, forests, oceans, and beside a waterfall). This has been partially added in 1.4 with the addition of lava and water ambient sounds.

Notch mentioned on his blog, The Word of Notch, that friends lists would be added after Beta 1.8.[13] The Minecraft documentary team of 2 Player Productions filmed a Keynote roadmap, containing these lines.[14][15] Kristoffer mentioned on Twitter that he is currently working on friends lists for Scrolls, then for other Mojang games. These will be available for players with Mojang accounts. At MineCon 2012 Jeb stated that it would be a large implementation on the server side and will be used for all Mojang games, and that is a big project.[16][17]

Lua Scripting was a feature mentioned by Notch as a way to create server side modifications.[18]

Players will not have to download scripts within or outside of the client, and therefore no client-side modifications will be necessary.

The server would be able to create custom commands, assign certain server functions to blocks, and create user groups.

Notch has said that he wanted Lua to be an extension for Minecraft. He does not want Lua to turn Minecraft into a game engine. Essentially, Lua, although a nice addition, will not revolutionize game-play in Minecraft.

Ryan Holtz stated that he wanted to improve the rendering system to allow for customizable models and animations.[20][21] Dinnerbone later stated that player models would not be able to be changed.[22]

Dinnerbone once tweeted about pandas in response to the question "If you could code any mob into the game, what would it be?"

On December 18, 2013, on Reddit, Dinnerbone answered the question "If you could add one feature to Minecraft without the hassle of coding or modeling, just anything, and you wouldn't need anyone's permission: What do?".

On October 22, 2013, Dinnerbone tweeted that the red dragon is "shelved" and not in development.

Later, on December 15, 2013, Dinnerbone wrote on Reddit that there will be red dragons in Minecraft one day.

Dinnerbone mentioned on Twitter that he was experimenting with adding seasons, and varying the length of day and night according to season. He also mentioned it during MineCon 2013.[29][30] Seasons may include changes in color of tree leaves and may also be tied to real time.[31][32]

Spike blocks were originally planned for Beta 1.7, working by extending and retracting spikes (and making them more "spike pistons" than anything), but were replaced by sticky pistons. On May 28, 2012, Dinnerbone stated that he'd like to add spike blocks, but is unsure of how to implement them.[33]

An inventory rewrite was originally added in the snapshot 14w17a for 1.8, but a roadblock was hit and they had to shelve it before the release of 1.8.[34] Other changes to the inventory have been mentioned, including spectators can now look at people's inventory, visible health/armor bar on all players,[35], seeing players' GUI when spectating from their POV[36] and the return of shift-double-clicking[37][38]

These features were briefly mentioned, but no further information was given after that.

Notch and other Mojang AB employees have frequently joked about adding various features to the game.