Mojang AB (full Swedish name: Mojäng Aktiebolag—Swedish for "Gadget Ltd."), pronounced "mo-yang" (IPA: /mʊˈjɛŋ/) in Swedish and "mo-jang" (IPA: /moʊˈdʒæŋ/) in American English[1], also known as Mojang, and originally Mojang Specifications, is a previously independent video game developer, primarily known for the creation and development of Minecraft. It was founded by Markus Persson, Jakob Porsér, and Carl Manneh. Located in Stockholm, Sweden, Mojang currently has 72 employees.[2][3] Mojang publicly announced on September 15, 2014 that they would be bought by Microsoft, and became part of Microsoft Studios on November 6, 2014.[4] 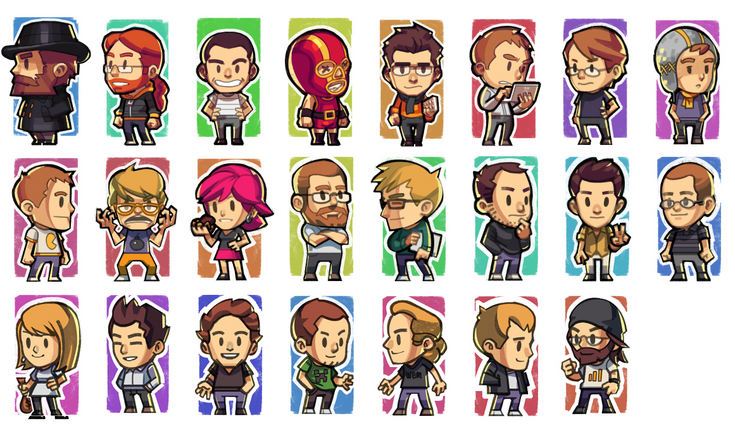 Scrolls is another Mojang game which was first conceived and developed by Jakob Porsér.[38] Its lead designer is now Måns Olson and its production manager is Henrik Pettersson.[39] Announced on March 2, 2011,[40] it aims to combine elements from trading card games and traditional board game in the strategy genre. The game was first made available to a limited number of people through alpha keys giveaways, starting from July 5, 2012.[41] It then hit beta on June 3, 2013[42] since when it is purchasable at a discounted price. The game was fully released on December 12, 2014,[43] but on June 29th, 2015, Mojang announced that development of Scrolls would cease as "the game has reached a point where it can no longer sustain continuous development"; the servers are expected to run until at least July of 2016, and all further proceeds will make sure the game is played for as long as possible.[44]

In August 2011, Mojang was threatened with legal action by the legal team representing ZeniMax Media, with the accusation being that the title "Scrolls" infringes on the The Elder Scrolls trademark, a series of role-playing video games published by Bethesda Softworks (a ZeniMax Media subsidiary). In mid-October 2011, the court case was won by Mojang,[45] and one employee described the outcome as "the court saw it from our side". No further action was taken against Mojang, and the name, "Scrolls" remained.

Cobalt is an action game developed by Oxeye Game Studios and published / co-developed by Mojang. The gameplay consists of "running, jumping, rolling, shooting, throwing, dancing, hacking, rolling, flying, sliding, climbing, looting, deflecting, racing, piñata-ing, passing, scoring… and even more rolling!" Cobalt is written in Lua and a dated alpha version is available on Windows and Mac. The game is expected to be released through a launcher, as well as on Steam for Windows and Mac. Cobalt will also available on Xbox 360 and Xbox One, which is being ported/developed by Fatshark, Pixeldiet, and published by Microsoft Studios. Cobalt was originally going to be released on October 30, 2015, but was delayed to be released on February 2, 2016 instead.[46] The game also features music by Mattias 'anosou' Häggström Gerdt.[47]

Crown and Council is a casual strategy game fully created by Henrik Pettersson.[49] It was released on April 22, 2016.

Following the end to his involvement with Minecraft, Notch began pre-production of an alternate reality space game set in the distant future on March 2012. On April Fools' Day, Mojang launched a satirical website for Mars Effect, citing the lawsuit with Bethesda as an inspiration.[50] However, the gameplay elements remained true and on April 4, Mojang revealed 0x10c as a space sandbox title.[51] It was eventually archived by Notch, as he didn't have the inspiration any more.

Until July 2012, Mojang was co-developing a video game called Rex Kwon Do alongside an undisclosed developer. Before the title had reached a significant stage of development, Mojang cancelled the collaboration, due to their lack of involvement and influence on the project.[52]