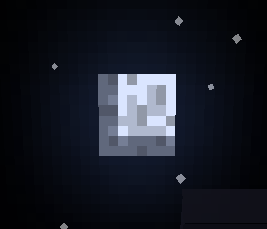 The moon is a celestial body that appears during the Minecraft night.

Nighttime begins after the sun fully sets and the moon rises. (On the Computer and Console Editions, the moon rises in the east and sets in the west; on Pocket Edition, it rises in the north and sets in the south.) As time passes, the moon will slowly move across the sky toward the opposite horizon. Overall, nighttime lasts about 7 minutes (in real time). Players can track the moon's position in the sky using a clock.

During the night, the moon illuminates the surface in the same manner as the sun; however, light levels will fall to a minimum of four. This allows hostile mobs such as zombies and creepers to spawn. To prevent spawning, you can swap the difficulty to peaceful or turn off the day-night cycle.

Grass blocks and saplings will not grow in moonlight, nor will they decay. To grow them at night requires the use of light sources such as torches. On the other hand, crops will continue to grow.

Nighttime can be skipped entirely using a bed, provided there are no monsters nearby.

Together with the moon, the night sky also consists of stars. Stars appear as bright points, and the starfield rotates with the moon as the night progresses. Because they rise in the east or north and descend in the west or south (depending on the edition), you can navigate by the stars even when the moon is not visible.

The Moon goes through eight lunar phases, and changes phase every night. This allows the player to keep rough track of the passage of time, even after spending a few game days underground.

The moon, showing its phases (viewed on the western sky).

The phases are (in chronological order as they appear in-game):

Slimes spawning in a swamp during the full moon

The phase of the moon has two subtle effects on mob spawning:

Issues relating to “Moon” are maintained on the issue tracker. Report issues there.