This page is about features that were added to Pocket Edition, but have no actual use or are simply placeholders for new features.

Glowing Obsidian blocks were part of the now obsolete Nether Reactor. It emits a soft red glow at light level 12, and drops a single obsidian when broken with a diamond pickaxe. It can only be obtained using inventory editors or Silk Touch. As of 0.12.1, this block doesn't generate anymore. The block may still be obtained using inventory editors or by retaining it from previous worlds before the update. 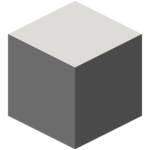 reserved6 is an unused block present in Pocket Edition. It acted as a placeholder block for Fire between Alpha 0.3.3 and Alpha 0.6.1, due to a bug in fire spreading mechanics that caused fire to spread to any block. The block looks like a gray stained clay. In Alpha 0.7.0, fire was returned with fixed spreading mechanics, replacing it. Its data value, however, changed to ID 255. Currently, it can only be obtained through inventory editing, however in Alpha 0.15.0, the reserved6 was removed completely and the texture was shown as info update block.

The functionality of the Nether Reactor was removed in Pocket Edition 0.12.1. However, the reactor core block still exists in game, and can be obtained through inventory editing or by retaining it from previous worlds before the update. It now drops its ingredients (unless mined with Silk Touch), allowing players to recover them.

There are four 2×2 tile paintings with no clear purpose or use. Using IDA and the Android libminecraftpe.so file, it has been found that the paintings are referenced from the game code, particularly in the Motive::getAllMotivesAsList(void) method (get all paintings), but the Painting::setRandomMotive(int) method excludes them as possibilities for a random painting. Artist and purpose of these paintings are both unknown.

The Stonecutter is a Pocket Edition exclusive block which is obtainable in creative mode only and is just used for decorative purposes. It can exist in survival worlds where one existed prior to Alpha 0.13.0. 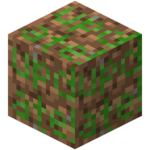 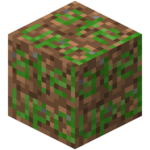 info update blocks are a set of two similar placeholder blocks present in Pocket Edition. These blocks are placed in the world when the game detects an invalid block ID. They take the appearance of a dirt block with the text "update!" and "ate!upd", which would form a readable word when placed next to each other. They were introduced in Alpha 0.1.3.

Some of the status effects in Pocket Edition are unobtainable and can only be obtained using inventory editing.

Blindness was added to the game in 0.12.0 development version. It creates a black fog around the player. It currently has some rendering issue with moving objects and colored text.