Rails are non-solid blocks that provide a path along which minecarts can travel.

Rails can be mined with anything, but pickaxes are the quickest.

They also drop as items when:

Rails can be found naturally running along the floors of abandoned mineshafts and in woodland mansions.

Rails can be found in 78.4% of chest minecarts in Mineshafts in stacks of 4–8.

A rail can be used as a minecart track and as a redstone component. A sequence of rails (including regular rails, activator rails, detector rails, and powered rails) is called a track.

To place a rail, use a rail item while pointing at a surface facing the space the rail should occupy. A rail can be placed on:

A rail cannot be attached to the side or bottom of any block, but attempting to make such an attachment may cause the rail to attach to the top of a block under the destination space. For example, if a fence is on the ground, attempting to attach a rail to the side of the fence will cause the rail to be attached to the top of the ground next to the fence instead.

When placed a rail will configure itself to be straight or curved according to rail blocks around it.

Existing tracks one block up and down are considered for adjacency in the same manner, and the new piece of track will be laid as a curve, but unless space is left for sloping track sections mine carts will only be able to continue past the curve on level or one-block-down corners. In one block up corners the cart will be left buried in the ground.

Some placement of rails will produce track layouts that will cause minecarts to collide and enter blocks.

Existing sections of track may be re-oriented, become sloping, or even change into curved sections when new rail is placed adjacent to:

The intersection rail at a T-intersection may be made to change its direction of curvature by applying redstone power using a redstone torch or lever.

Separate tracks laid adjacent but at the next level lower or higher can sometimes cause issues but normally will not interact with the switched rail. 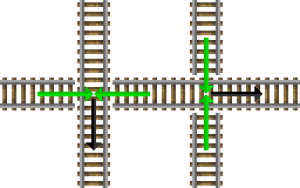 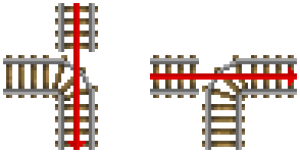 When entering a T-shaped intersection from the "back of" the curved rail a mine cart will travel straight through the intersection. Entering from either of the other two legs it will follow the curve.

In a 4-way intersection constructed to have no curved rail a cart will pass straight through in the direction of the continuous line. When entering the 4-way from east or west a cart will turn according to the south-east rule. 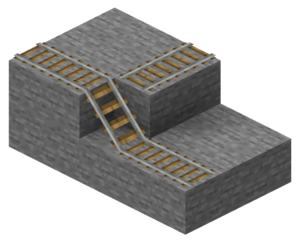 At non-curve track intersections minecarts will always travel downhill if they can. This is known as the downhill rule and overrides the south-east rule.

A cart moving with enough speed is able to jump single block gaps in a rail line and continue on travelling.

A block placed above the track at the downhill end of a ramp will prevent minecarts from traveling down the slope, but not up. In order for a minecart to move down a diagonal tunnel, there must be just as much clearance as a player needs to walk it.

A diagram on how minecarts travel according to track curves.

If a straight track piece leads to a curve block and isn't attached to the curve, a minecart will run over the gap and continue to go straight over the curve. This is not applicable with other types of rails.

Notably, the minecart can exceed the normal 8 m/s speed limit while it jumps over the gap. For example, by placing intersections on every other block of a straight track, it is possible to travel at 10 m/s in a straight direction (but it will be a very uncomfortable ride).

The performance of minecarts on a track is affected by the way the track is placed. Running track next to a wall (especially diagonal tracks), placing lampposts next to it, or having hills to climb will adversely affect the speed of a minecart, and consequently its distance travelled.

Carts with a rider, or minecarts with chest, have more momentum and so climb higher than carts that are unloaded. With a rider, a minecart can climb at least 24 blocks before needing powered rails to go higher.

Every rail has an ID name of minecraft:rail and stores its orientation in its block data. A rail also has a block state which is expected to replace the functionality of block data in a future version.

A rail's block data specifies the directions to which it connects.

Issues relating to “Rail” are maintained on the issue tracker. Report issues there.