Minecraft Realms is an official subscription-based server hosting service that allows players to create and manage their own private Minecraft servers. Hosted by Mojang, Realms provides an easy and fast way to create servers and allows the owner to manage them from inside the game, without prior knowledge of the concepts for hosting on the Internet. Realms also allows players to choose from a list of minigames (updated by Mojang approximately every 2 weeks) to play temporarily, as well as several pre-made world templates, adventure maps, and experiences. Realms are not intended for large public servers, but for groups of friends or as a family server.[3]

Realms is a service that can only be used by players that meet these requirements[4]: 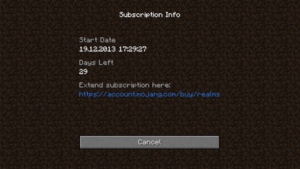 The subscription screen in-game, accessed through the Configuration menu.

Realms is a subscription-based service. The link above will take you to your Mojang account page and will allow you to extend a current Realm or buy a new one ($7.99 per month for PC/Mac, and $3.99 per month for Pocket).[5][6]

All players are able to have a 30-day free Realms trial, providing they have not had a free trial on their Mojang account before.[7]

Within the Realms service, users can elect to temporarily replace their regular world with a "minigame" or permanently replace their regular world with a world template, adventure map, or experience. You also cannot use most of the commands or options while your realm is using a preset minigame. Certain maps may not be currently available on Realms due to being phased out or incompatible with the current update.

Minigames are temporary games designed to be played and reset continuously.

Experiences are maps designed for observation and exploration. These maps lack a goal that the player is actively working towards completing.

Although Realms is hosted by Mojang, and therefore safe and secure, it has some limitations. These limitations can be avoided by using the standard server software or a third-party hosting website.

As of Minecraft 1.7.10, Realms has its own versioning system. Below is a changelog of all those updates:

Originally, Realms updates were tied into regular Minecraft updates, until the release of Minecraft 1.7.10. Below is a changelog of all those updates.

The following chart shows when Realms was introduced in the respective countries.

Issues relating to “Realms” are maintained on the issue tracker. Report issues there.