This article is about redstone and redstone dust. For other topics related to redstone, see Redstone/lt (disambiguation).

Redstone is a flat transparent block which can transmit redstone power.

Redstone can be obtained by mining or smelting redstone ore, destroying jungle temple traps, crafting blocks of redstone, killing witches, trading with villagers, or by breaking previously-placed redstone dust. It can also be found in chests that spawn in naturally generated structures.

Redstone dust can be broken instantly using any tool, or without a tool, and drops itself as an item. Its hitbox may only cover part of the surface below, depending on the orientation of the redstone.

Redstone dust will also be removed and drop redstone as an item:

Redstone can be crafted from blocks of redstone.

A single witch will drop 0 to 6 redstone when they die, even when not killed by the player. The drop chance can be increased to 0–15 using the Looting enchantment.

A single redstone ore will yield 4–5 redstone when mined with an iron or diamond pickaxe. With the Fortune enchantment, additional redstone up to the enchantment level may be dropped (e.g. 0–3 extra will be dropped with Fortune III).

Clerics can offer to trade 1 to 4 redstone for an emerald as one of their second-tier trades.

Redstone is used for brewing, crafting, and in redstone circuits by placing it on the ground to create redstone dust.

When placed in the Minecraft world, redstone becomes a block of "redstone dust", which can transmit redstone power. 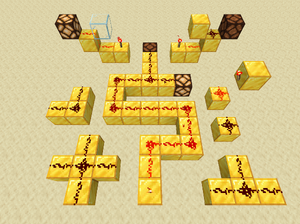 Redstone dust can only be placed on opaque blocks as well as glowstone, upside-down slabs and upside-down stairs, and hoppers.

Redstone dust will not automatically configure itself to point towards adjacent blocks or mechanism components. If such a configuration is desired, the other neighbors of the redstone dust must be arranged to create it.

When redstone dust is reconfigured after placement, it will not update other redstone components around it of the change unless that reconfiguration also includes a change in power level or another component provides an update. This can create situations where a mechanism component remains activated when it shouldn't, or vice versa, until it receives an update from something else – a "feature" of redstone dust that can be exploited to create a kind of block update detector.

For different reasons, each signal can go up but not back down.

Redstone dust can be "powered" by a number of methods:

Redstone dust can transmit power up to 15 blocks.

Power level drops by 1 for every block of redstone dust it crosses. Thus, redstone dust can transmit power for no more than 15 blocks. To go further, the power level must be re-strengthened – typically with a redstone repeater.

Powered redstone dust on top of, or pointing at, an opaque block will "weakly"-power the block. A weakly-powered block will not power other adjacent redstone dust, but will still power redstone repeaters and comparators and activate adjacent mechanism components. Transparent blocks cannot be powered.

Redstone dust is defined by its ID and block data. Redstone dust also has a block state which is expected to replace the functionality of block data in a future version.

Note: These videos do not show all uses for redstone in crafting and all methods of obtaining.

Issues relating to “Redstone”, “Redstone dust”, or ”Redstone wire“ are maintained on the issue tracker. Report issues there.