A redstone comparator is a block used in redstone circuits to maintain, compare, or subtract signal strength, or to measure certain block states (primarily the fullness of containers).

A redstone comparator will also be removed and drop itself as an item:

It takes 1 redstone tick (2 game ticks, or 0.1 seconds barring lag) for signals to move through a redstone comparator, either from the rear or from the sides. This applies to changing signal strengths as well as simply to turning on and off. Redstone comparators usually will not respond to 1-tick fluctuations of power or signal strength — for example, a 1-clock input will be treated as always off from the side, and always on from the rear.

A redstone comparator with no powered side inputs will simply output the same signal strength as its rear input.

A redstone comparator can measure the fullness of a chest, as well as other block states, even through a block.

A redstone comparator used to measure the state of a container outputs a signal strength in proportion to how full the container is (0 for empty, 15 for full, etc.).

Containers which can be measured by a comparator include:

When a comparator measures a large chest or large trapped chest, it measures the entire large chest (54 slots), not just the half directly behind the comparator. A chest or trapped chest which cannot be opened (either because it has an opaque block or ocelot above it) will always produce an output of 0 no matter how many items are in the container.

The Minimum Items for Container Signal Strength table (right) shows the minimum number of 64-stackable items required to produce specific signal strengths from various containers. A number followed by an "s" indicates the number of full item stacks required (not displayed if a full stack is not required), and a number followed by an "i" indicates the number of additional items required (not displayed if no items are required beyond some number of item stacks). For items which stack up to a maximum of 16 (snowballs, signs, ender pearls, etc.), divide the "i" number by 4 and round up. For non-stackable items, count any "i" number as one additional item.

For example, to produce a signal strength of 10 from a hopper requires a minimum of 3 full stacks plus 14 more items (or 4 16-stackable items).

When a container is empty, the output is off.

When it is not empty, the output signal strength is calculated as follows:

Example: 300 blocks in a dispenser (which has 9 slots), where each block stacks to a maximum of 64, produces output with a signal strength of 8:

It can be useful in redstone circuits to use containers with comparators to create signals of a specific strength. The number of items required in a container to produce a signal of desired strength is calculated as follows:

Example: To use a furnace (which has 3 slots) to create a strength 9 signal, you need 110 items: 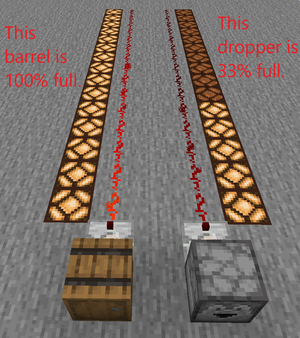 Some non-container blocks can also be measured by a redstone comparator:

A cake outputs a signal strength relative to the amount of cake remaining. Each slice is worth 2 signal strength, with 7 total slices, for an output of 14 for a full cake.

A cauldron outputs different signal strengths depending on how much water is inside. From completely empty to completely full, the output values are 0, 1, 2, and 3.

A command block stores the "success count" of the last command executed, which represents the number of times the most recently used command of this command block succeeded. A "success" is defined by the command's success conditions: if a red error message is returned in the chat, the command was not successful.

Most commands can only succeed once per execution, but certain commands (such as those which accept players as arguments) can succeed multiple times, and the comparator will output the number of times it succeeded (maximum 15).

A command block continues to store the success count of the last command executed until it executes its command again, thus the comparator will continue to output the same signal strength even after the command block is no longer being activated (it doesn't turn off when the signal to the command block turns off).

An end portal frame outputs a full signal of 15 if it contains an eye of ender and zero otherwise. 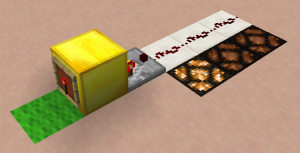 A comparator can measure the presence and rotation of an item frame's contents.

Issues relating to “Redstone Comparator” are maintained on the issue tracker. Report issues there.