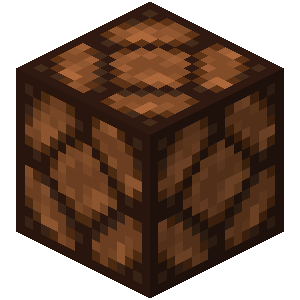 A redstone lamp is a block which produces light when activated with a redstone trigger.

A redstone lamp can be mined by hand or with any tool, dropping itself as an item.

A redstone lamp can be used to produce switchable light.

Redstone lamps are redstone mechanisms and can be activated by:

Although a redstone lamp acts like an opaque block in most ways (torches and levers can be attached to it, redstone dust can be placed on it, etc.), an active redstone lamp is "transparent" to sky light, reducing the sky light level by 1.

A redstone lamp uses its ID to specify its activation state:

Every redstone lamp (active or inactive) has a block data value of 0. Redstone lamps have no block states.

Issues relating to “Redstone Lamp” are maintained on the issue tracker. Report issues there.

Note that lamps themselves are solid blocks, so they power other lamps. This causes the cross-shaped patterns that you see.

A glowing roof is easy to do - just lay wire across the blocks, or line the top of the lamps with redstone blocks. Floors and walls are also do-able. For a floor, just use the "knight's move" shape underneath the floor with torches. For a wall, use wall-mounted torches that power blocks above them.