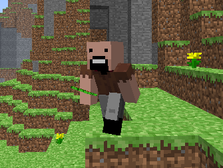 Sneaking is a gameplay feature that prevents players from falling off of blocks, helps players hide from enemies, among other useful features.

Toggling sneaking allows the player to switch between walking and sneaking without having to hold down a key. To toggle sneaking on a Windows system, press and hold the sneak key while holding down Alt. This will freeze the game temporarily; to resume the game release both keys, then press and release Alt again. To return to normal walking, press and release the sneak key again. This method works in both windowed and fullscreen mode. To toggle sneaking on a Macintosh computer, simply change the sneaking hotkey to ⇪ Caps Lock.

A player sneaking over a pit to avoid falling into lava

Sneaking does not affect:

Issues relating to “Sneaking” are maintained on the issue tracker. Report issues there.