Status effects are various conditions that affect an entity, which can be either helpful or harmful. Status effects can be inflicted in various ways throughout the game, most commonly from use of food, potions and beacons.

The /effect command allows players to inflict effects upon themselves and other players and entities.

Any entities inflicted by a status effect will be affected in various ways for an amount of time. During the effect, swirly particles emanate from the position of the inflicted entity. Players can open their inventory to see any current status effects afflicted upon them, as well as its strength and duration. The level of the effect determines its power. The higher the level, the stronger the effect is.

Internally, and in the /effect command and potion Amplifier NBT tags, the game stores an "amplifier" value rather than the level. The amplifier is one less than the level, for example Strength II has an amplifier of 1.

Due to the way this amplifier is stored in NBT, amplifiers of 128 to 255 (levels 129 to 256) in NBT tags (e.g. on potions) are treated as if they were −128 to −1 (levels −127 to 0) respectively. The /effect command initially applies such amplifiers in their positive-valued sense but this is later converted to the negative-valued interpretation, leading to inconsistent results.

Any number of different status effects can be simultaneously active on a player, even in the case of opposing effects, such as Strength and Weakness. However, it is not possible to apply the same effect multiple times, even if the effects are of different levels (e.g. Strength and Strength II cannot both be active at the same time). In the event of applying an effect already active on the player, the new version of the effect overwrites the old effect, giving a new level and full duration, if the new effect is of equal or greater level.

Note that even with commands, effects cannot be made to last forever. If an effect is set to an excessively large amount of time, such as 182 hours [655200 seconds], it will display as "**:**", but will still continue ticking down and eventually expire.

All of these status effects can be removed by drinking milk. Singleplayer users with cheats enabled and operators in Multiplayer servers can use command /effect with the time of the effect set to 0 or /effect <playername> clear to achieve the same goal.

Sources
Blocks, items, and mobs which can produce the effect legitimately in Survival mode. The /effect command can produce all status effects so is not repeated below.

) × level "absorption health". Absorption health cannot be replenished by natural regeneration or other effects, and vanishes when the effect ends.
Negative levels do nothing initially, but give 4 (

Notes
Absorption hearts of a mounted mob can be seen while riding it.

Effect
Impairs vision as if a thick black fog were surrounding the player. Also prevents sprinting and critical hits.

Notes
The Sun and Moon can be seen as normal. Also, liquids do not fade into the fog perfectly. If combined with Night Vision, the screen will be covered by fog. The radius of the fog around the player is 4.5 blocks.

Grants immunity to fire, lava, the direct impact of blaze fireballs and standing on magma blocks.

Notes
Most Nether mobs (excluding chickens and skeletons) are naturally resistant to fire and lava without requiring the Fire Resistance status effect. However, Nether mobs can still be damaged by the direct impact from a blaze fireball, while Fire Resistance grants immunity to that.

Effect
Causes entities to glow with an outline that can be seen through opaque blocks. 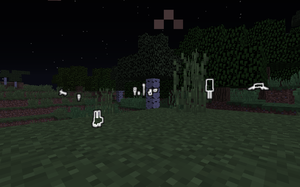 The Glowing effect, added to all entities by command.

Effect
Increases mining speed by 20% × level and attack speed by 10% × level.
Negative levels cause blocks to be mined slower and the player's arm to move more slowly, and decrease attack speed.

Notes
At levels 3 or higher, the player's arm will not move while mining.
Alternative methods of increasing mining speed include: the efficiency enchantment.

) × level. Added hearts will initially appear as damaged until healed.
Negative levels reduce base health, however the entity's actual health is not decreased to the new maximum until damaged or healed.

Notes
Actual health may be above the base value after the effect ends and will not be capped, unless the entity is healed. Extra hearts of a mounted mob can be seen while riding it.

per 80/level seconds if target has no saturation).
Turns the hunger bar yellow-green (

).
Negative levels will decrease food exhaustion. This does not increase saturation or the hunger bar.

) × 2level.
Undead mobs (including the wither) are healed as if with Instant Health instead. Death is reported as "<player> was killed by magic". If the effect is forced to last longer than 1 tick, it will damage entities every tick. Levels 30–32 provide no damage. Amplifiers outside the range 0–31 (corresponding to levels 1–32) are used modulo 32.

) × 2level.
Undead mobs (including the wither) are damaged as if with Instant Damage instead. If the effect is forced to last longer than one tick, it will heal entities every tick. Levels 30–32 provide no healing. Amplifiers outside the range 0–31 (corresponding to levels 1–32) are used modulo 32. 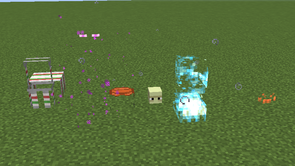 The visible parts of a saddled pig, a decorated llama, a shulker, a spider and an enderman

Notes
Mobs will not attack/sense the player until the player is much closer than normal. A player with no armor will be detected at 7% of the usual detection distance. Any one piece of armor increases this to 17.5% of the usual distance, and each additional piece increases this by another 17.5 percentage points. After detecting the player, a mob will continue to follow as it does when the player is not invisible.
Additional methods of reducing detection by mobs include:
Players in Spectator mode see invisible entities as translucent instead.

) each level.
Negative levels decrease jump height and increase fall damage (which also causes the player to start taking damage from short falls that would normally do no damage); extreme negative levels will eliminate all jumping ability and will cause damage even when stepping off a slab.

When at max level, jumping will not be changed but a player will never take fall damage.

Effect
Causes the affected entity to float upwards at a rate of 0.9×level blocks per second.
Does not affect swimming or flying. Negative levels cause the entity to float downwards, overriding the usual falling due to gravity. Fall damage is not affected.

Notes
Additional methods of moving upwards include: flying with elytra, and jumping on a slime block.

Notes
Using a fishing rod enchanted with Luck of the Sea increases the chances of high-quality loot but doesn't actually grant the Luck status effect.

Effect
The effects on mining speed are shown in the table below:

Notes
The effect does not affect block breaking in Creative mode, or blocks that are broken instantly.
Other conditions which reduce mining speed include: sneaking; being underwater; riding a horse, pig, or minecart.

Wobbles and warps the view.

Notes
After a zombie villager is cured, the villager gets Nausea for 10 seconds.
Standing in a nether portal affects vision similarly but doesn't actually grant the status effect.

Notes
Screen flashes for 10 seconds before the effect wears off. If used in the End everything will appear pink. If combined with Blindness, the screen will be covered by fog. If used in the Void, the player will see nothing other than black.

Effect
The amount of damage inflicted to the affected entity is shown in the table below:

* Due to damage immunity, the effective rate is 12 ticks (

× 1 per second) at level 5.
The player's hearts turn yellow-green (

).
Damage is suppressed while the player or mob is already at

health, but can resume if healing occurs before the effect expires. Amplifiers outside the range 0–31 (corresponding to levels 1–32) are used modulo 32.
Undead mobs and spiders are unaffected.

Effect
The amount of health healed over time is shown in the table below:

Undead mobs are unaffected. Amplifiers outside the range 0–31 (corresponding to levels 1–32) are used modulo 32.

Notes
When a villager opens a new tier of trade, it gets Regeneration I for 10 seconds.

Notes
Level 5+ gives the player full immunity to all damage, with the exception of the void and the /kill command.

Notes
Spiders, cave spiders, silverfish, and endermites get the effect when attacked with a weapon enchanted with Bane of Arthropods.
At levels 7–127, the player will be unable to move unless they jump while moving or throw an ender pearl.
Alternative methods of reducing travel speed include: walking on soul sand or slime blocks, or through cobwebs; swimming; riding a boat on land; sneaking; eating; drinking milk or a potion (travel speed is reduced while drinking any potion, regardless of the effects of the potion after drinking is finished); aiming a bow; blocking with a shield

) × level.
Negative levels decrease melee damage, with attacks being ignored entirely if damage would be 0 or lower.

Notes
While a zombie villager is being cured, it will have the Strength I effect in Normal difficulty or Strength II in Hard difficulty.
Alternative methods of increasing melee damage include: critical hits.

Notes
Alternative methods of slowing or preventing drowning include: the Respiration enchantment.

Notes
Zombie villagers can be cured of zombification using a golden apple if they have the weakness status effect on them.

Inflicts damage over time (and can kill).

Effect
The amount of damage inflicted to the affected entity is shown in the table below:

* Due to damage immunity, the effective rate is 10 ticks (

Notes
Death is reported as "<player> withered away".

Issues relating to “Status effect” are maintained on the issue tracker. Report issues there.