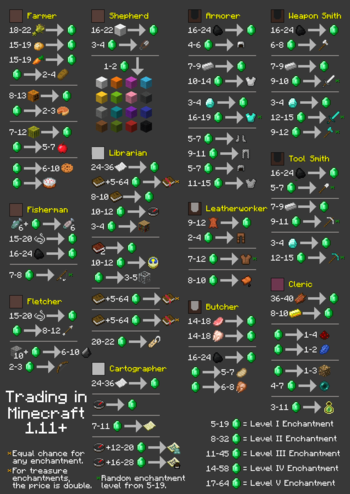 The trading system is a gameplay mechanic that allows players to trade emeralds for items (and vice-versa) with villagers. Trading is not available in Pocket Edition.

Right-clicking on a villager will open a GUI allowing a player to trade with the villager. Villagers will make offers based on their profession and career, and will only make trades based on what offers they are making. Different offers may be viewed by pressing the left and right buttons next to the currently displayed offer. All offers involve emerald as a currency, and some item pertinent to the villager's career. Trading allows the acquisition of uncommon items. It is also the only legitimate method of acquiring bottles o' enchanting in Survival mode. 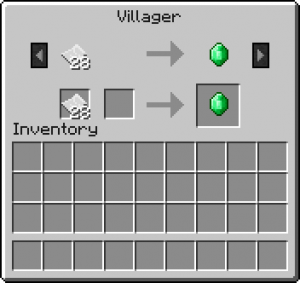 The trading interface displaying a trade of 28 paper for 1 emerald.

Different careers are assigned to each villager, and are viewable in the trading GUI. For example, brown-robed villagers can be fletchers or fishermen; blacksmiths can be armorers or weapon smiths; etc. Every villager spawns with tier 1 of their given career, which range from 2–4 initial unlocked trades (i.e. all shepherds will spawn with only two options, buying wool and selling shears). Each tier consists of a defined set of trade offers, and the tiers are the same for any given career (see the chart below). They can unlock new tiers when an existing offer is traded. Note that the trading GUI must be closed before a villager will unlock a new tier. When they do, they will receive Regeneration I and become surrounded with purple and green particles for a few seconds. Each career has a fixed sequence of tiers, and will only unlock a finite number of offers.

Villagers will deactivate an offer if the offer has been used some number of times. The chance of an offer's deactivation is random, but an offer must be used at least 2 times before it is eligible for deactivation. After an offer has been used 12 times, it is guaranteed to be deactivated. Trading a different offer may activate an offer again. When an offer is disabled, a red X will appear in the trading interface, and it has the same particle effect as an offer being created.

An offer is guaranteed to reactivate available options (and unlock a tier, if some have not yet been unlocked) the first time it is traded. On subsequent trades, it will only have a 20% chance of doing so, per trade. For example, if a farmer villager has a trade which is 8 pumpkins for 1 emerald, and a stack of 64 pumpkins is traded, this will count as 8 attempts with each attempt having a 20% chance to reactivate the villager's trades.

The full list of careers and tiers is below:

Issues relating to “Trading”, “Trades”, or ”Trade“ are maintained on the issue tracker. Report issues there.