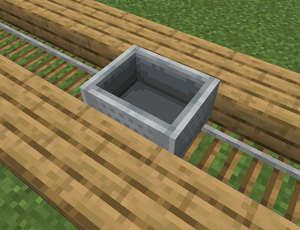 A minecart, one method of transportation

Transportation involves the methods by which players move around the world or between dimensions (the Overworld, the Nether and the End).

NOTE: For speed measurements on any method of Transportation, all speeds are shown in SI Units. 1 m/s equals 3.2 ft/s and 1 km/h equals 0.621 MPH. It is important to remember that 1 block is 1 m3, therefore 1 m/s is equal to 1 block per second.

Each additional level of Speed allows the player to walk at nearly the sprinting speed of the previous level, and sprinting with Speed II allows the player to keep pace with a minecart on fully powered rail. With adequate food and potion supplies, sprinting may be more cost-effective than building high-speed transportation systems.

There are some examples of purely vertical transportation methods:

Falling speed is more complex: Every tick (1⁄20 second), non-flying players and mobs have their vertical speed decremented (less upward motion, more downward motion) by 0.08 blocks per tick (1.6 m/s), then multiplied by 0.98. This would produce a terminal velocity of 3.92 blocks per tick, or 78.4 m/s. However, the sky isn't quite high enough for that: Falling from layer 256 to bedrock takes about 5.5 seconds, with impact at 3.5 blocks per tick (70 m/s). (In creative mode, you can fly higher, and could potentially reach terminal velocity falling from "above the sky".)

A function to calculate the speed of a (free)falling player is the following: v(t) = (0.98t - 1) × 3.92. The velocity v is in blocks/tick (or meters/tick), and the time t is in ticks. The usual downward velocity will be negative.

Note: This video is outdated as another form of transportation (elytra) was added in 1.9.

Issues relating to “Transportation” are maintained on the issue tracker. Report issues there.