This tutorial is intended for advanced users! It is expected that you are familiar with the JSON data format. If you are not, please read the JSON sections of the Behavior Add-on tutorial. In this tutorial, we will be covering:

You will need the following programs to follow along with this tutorial:

Minecraft’s models are defined using JSON in a file called mobs.json. You can find mobs.json in the Vanilla Minecraft resource pack at Vanilla_Resource_Pack/models/mobs.json. This file contains the definition for every entity’s model. Each definition looks something like:

The name of the entity that this model belongs to 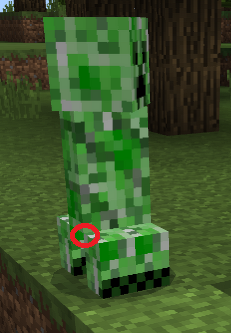 The red pixel is the pixel you want to specify for the UV for the “body” bone for the creeper (“uv”: [ 16, 16] ). The body will then be textured using the texture in the area enclosed in the dotted line. 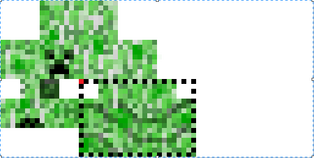 Bones are what we use to animate a model. Think of it like a human skeleton! In the human body, bones are moved by muscle, and your flesh moves along with them. In 3D animation, bones are moved by an animation and that, in turn, moves the geometry that is attached to them!

Models are not entirely data driven yet. While it is possible to change things about a model, there are still certain hardcoded values like: which bones an entity needs, what material an entity is rendered with, and what animations an entity has. This means that you cannot just copy and paste geometry from the villager into the spider section and hope that it works! Until this system becomes more data driven, you will need to do some experimenting to achieve the results that you want!

Make sure you name your bones correctly! The name of the bones for an entity should be the same as they are in the Vanilla Minecraft resource pack. The animation and rendering of a model relies on this information being correct as explained above!

Now that we’ve looked at how the Minecraft model format is setup, let’s modify the creeper a bit. We are going to make him have 3 heads, 2 on bottom and then 1 stacked on top, like a pyramid.

Note that we don’t have to change the UV’s for any of the new heads because we copied the old head’s UV coordinates and we aren’t adding different textures to the new heads. 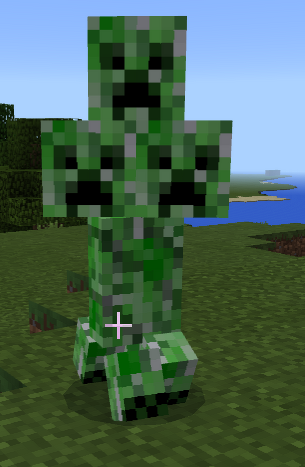 If you want to change another entity’s model, make sure to add a comma after the closing } of “geometry.creeper”.

If you’ve made it to here, you should now know everything you need to know to make your own entity models!