This page documents how to locate and defeat temples.

The treasure room inside the hidden lower chamber of the temple.

The 9 TNT rigged under the stone pressure plate.

To find a desert temple, you can either look above ground, or search while mining. If you are underground and you run into a large, square formation of sandstone, it is a desert temple.

There is also a tool that can find desert temples for you, in case you don't want to search them yourself.

When attempting to enter the hidden chamber, the player must take care not to step on the pressure plate at the bottom of the pit, as the plate is connected to 9 blocks of TNT just under the hidden chamber's sandstone floor. The pressure plate is situated directly under the blue stained clay. The TNT will cause an explosion sufficient to kill most players (and may even destroy the player's drops), as well as destroy all four of the chests, including their loot.

To avoid the trap, you can dig out one of the blocks orthogonally or diagonally adjacent to the center block, and reach the chamber by any of conventional methods. Or, if reached from below, it is possible just to mine the way into the chamber.

You may also make a staircase and go down to the treasures.

Another way to get down is to dig out the blue clay and use a water bucket to get down.

The dense foliage of jungle biomes tends to block jungle temples from sight. The easiest way of clearing the path is to burn the foliage with flint and steel. 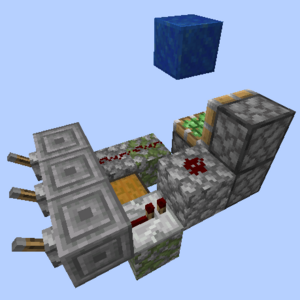 A reconstruction of the puzzle mechanism. The lapis lazuli block represents the hidden trapdoor.

In each jungle temple, there is a puzzle, composed of a set of levers on the lower level. When the levers are flipped into the correct positions, a block on the middle level of the temple is removed from the floor, and a small room with a chest inside is revealed.

Alternatively, breaking through the walls with a pickaxe is an effective method of bypassing the puzzle and taking the loot.

When attempting to open the chest, the player must take care not to step on the tripwire in the middle of the hall. It looks like mossy cobblestone, but hidden behind some vines is a dispenser filled with arrows. The dispenser will fire when the tripwire is stepped on or broken without shears. If the player can't break it, hugging the right hand wall will cause the arrow to fly harmlessly past the player.