Why would someone want ridiculous quantities of snow?

To operate the farm, the player will need one or more shovels and inventory space sufficient to collect a lot of snowballs. Note that snowballs only stack to 16, although they can be crafted into snow blocks that stack to 64 without needing a crafting table.

Note that farms may be built at any level in extreme hills and in river biomes, which are reasonably easy to find even in areas full of deserts, savannas, and mesas. 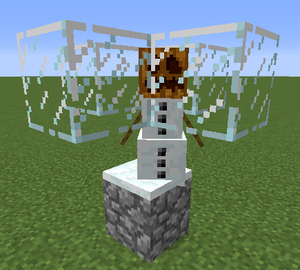 The general idea is to construct a snow golem trapped in a 1×1 space, standing on a block that can support snow layers and isn't quickly destroyed by shovels, where the player can easily target said block.

Enhancements might include hoppers to collect snowballs and feed them into chests when the player's inventory is full, a hopper minecart under the floor block for the same purpose, and a mechanism to dispense more shovels into the player's hand as existing shovels break.

Simply stand next to the golem's floor block, equip a shovel, aim at the snow layer on top of that block without hitting the golem itself, and hold the dig control.

Note that the mobGriefing gamerule must be enabled, otherwise the golem will be unable to create snow.