A snow golem's primary purpose is to defend the player from hostile mobs. They can keep enemies away from your house, or another area that needs protection, such as an NPC Village to protect NPC villagers from zombies and break up sieges. They can also lure mobs into traps, collecting their drops for the player. An Enderman hit by a snow golem will teleport away and ignore the player, making them useful if you accidentally look at one.

Snow Golems also have some offensive uses as well. Because they are relatively quick and cheap to build, especially compared to Iron Golems, they can be deployed during combat. Any mob that they hit will ignore you to attack the snow golem, allowing you to kill it with a sword while it's distracted. This provides a safer way to kill spiders and skeletons, which are normally dangerous to get close to. When using a bow, the knockback of a snow golem will slow down mobs, giving you more time to shoot them, and also protecting you from spiders and skeletons. If attacked by an enderman, a single snowball will turn it neutral, so don't be afraid to make a golem if you are losing the fight. Also, if attacked by numerous mobs, creating a snow golem or two will both distract them and slow them, giving you plenty of time to escape. Since both pumpkins and snow can be found in cold taiga, ice plains and extreme hills biomes, it may be a nice idea to build a few when first starting out if one is desperate.

Snow golems deal no damage to most mobs, except to blazes 3 (

). Given enough splash potions of fire resistance, they can be used to farm blaze rods from blazes, as long as the player deals the final blow.

Keep in mind that snow golems no longer attack creepers, so prioritize them when fighting with snow golems. For this reason, snow golems also partner well with Ocelots. Having both will keep your base free of all mobs. However, snow golems in Xbox 360 Edition will attack creepers. The creepers will usually blow up at a safe distance, though.

Don't expect snow golems used in battle to last, whether offensively or defensively. Their vulnerability can be reduced, but if it has a way to shoot mobs, skeletons have a way to shoot it. Make a pumpkin and snow farm, so you have golems readily available.

Due to their small health (4 (

Snow Golems can also be used to farm Snow, as they immediately replace snow on the block(s) that they are standing on. This can make a fast snow farm. For more information, go to Tutorials/Snow Farming

A pushing turret's role is simple: Keep mobs away from your house. To do this effectively, they require a large number of snow golems, at least three, preferably more. It is possible to build one with a single snow golem, however, it won't be effective and will likely be killed if not in a protected turret. Four snow golems throw snowballs quickly enough to continuously push a zombie back.

The sheer number of snowballs will push mobs away faster than they can reach the golems. This usually occurs until the mob is either killed by the player, burns in sunlight, or despawns. This makes them very effective against zombies, and fairly effective against spiders if you have enough golems. They are fairly straightforward and open-ended to build, all they require is a place for several golems to shoot from. If they are in your wall of your house, you can remove a block behind them to break the snow from under them from inside your house, thus doubling as a snow farm and saving space.

It is also possible to make a pushing turret that knocks the mobs into a hazard, for example, a narrow pathway with golems on one side and lava on the other. Players can walk across safely, but any mob will be pushed into the lava. Keep in mind, however, that, because once hit, mobs move toward the golem, to do this requires either the mob to be killed after the first hit, or a great number of golems to provide knockback faster than the mob can walk. To kill mobs, it is generally better to use a pulling turret.

Pulling turrets are like pushing turrets but with fewer golems, usually just one, and they have a hazard, usually lava, between the mobs and the golem. Instead of keeping the mobs away, their purpose is to bring them closer, where a trap awaits. It may take some time for the mob to reach the trap, as the knockback will slow them down, and this kind of turret usually only targets one mob at once, so it is advised to have several. If the trap protects the golem from all sides, such as a lava moat, they don't need as much protection, as no mobs will be able to reach them anyway. However, it is still recommended to keep them enclosed, to prevent them from moving and possibly falling into lava, and to protect them from skeleton arrows. Possible traps include lava, cacti, or even a pit. It can also lure monsters into a Mob Trap, where they are either killed, or weakened to be finished off by the player. This makes it a more versatile and strategic tool than a pushing turret.

The following is an example of a pulling turret. 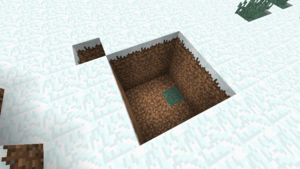 2.From the center of the hole build up 5 blocks of a non-flammable material such as Cobblestone.

3.Surround the top block of the tower with non-flammable material so that there is a 3x3 square with one open block between the square and the hole.

4.Build another 3x3 square directly atop the last but without a center block.

5.On one of the non corner blocks build up 2 blocks, place a slab on all other non-corner blocks.

6.Build a snow golem in the middle.

7.On the 2 block tower from the top block place 1 block in so that it is above the golem's head and the golem cannot jump.

8.Delete the slabs and 2 block tower but leave the middle block floating, if you like you can make it a 3x3 square above the golem, however this is not necessary because after Beta 1.8 (The adventure update) Skeletons no longer fire in an arc, rather a straight line.

9.Delete the first 3x3 square (the one 1 block above the hole) without deleting the middle (the snow golem is standing on that!)

10.Delete the bottom 4 blocks of the tower but not the one your golem is standing on.

11.Place 1 lava on the bottom of the block the golem is on. Since the golem deals no damage (except to Blaze) and mobs will attack it if hit when they come up to it there is a chance they will die in the lava.

12.If you wish to make it more deadly you can place Cacti at the corners. However, this could possibly allow spiders to climb it and reach the golem. 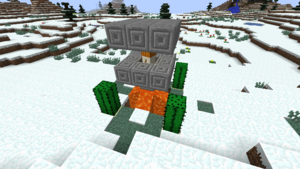 13. If you'd like to collect the drops, in the 3x3 hole, make the deepest layer have water on one side leading to a collection center, the middle layer signs, and the top layer lava.