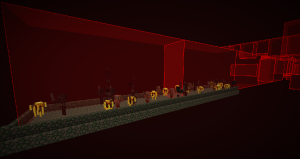 A wither skeleton farm is a mob grinder that involves creating a spawning pad inside a nether fortress, while removing all other mob spawning points nearby.

Wither skeletons have a chance to drop a wither skeleton skull, three of which are required to create a wither, which drops a Nether Star to craft a beacon.

A typical farm of this type usually means destroying all platforms on which the wither skeletons can spawn and replacing them with collection points (usually lines of blocks with pressure plates on them for pistons to push into a grinding point).

You will need a variable amount of materials depending on the size of the grinder but a small sized farm needs around:

1. Begin by marking the bounds of the nether fortress chosen.

2. Destroy all of the platforms that make up the nether fortress to limit spawning.

1. Create a line of a chosen building material (preferably cobblestone due to its common occurrence and resistance of ghast's fire balls) from one end of the marked area to the other.

2. Place pressure plates on the top of the line and redstone torches on one side of the line.

5. Place half slabs on top of the third line of cobblestone to prevent wither skeletons from spawning on top of the collectors instead of inside them.

After the mob collectors have been made correctly and wither skeletons are being spawned, you will need to make a bucket shape of cobblestone under the collector so that all spawned mobs are at one main point. This can easily be achieved using the remaining cobblestone by making a tube from the collectors to the area chosen for grinding. Once the mobs are at the grinding point they can all be killed in one area simplifying collection and speeding up the whole process.

You may want to add a cage of some sort around the farm to prevent ghasts from blowing up the structure during collection. As well as that, most wither skeletons only drop coal and bones and only when they are killed by a player is a wither skeleton skull dropped.

Using wolves, one can make an automatic wither skeleton farm by having the player stand nearby. As long as the wither skeletons cannot reach the wolves, there is no chance of the wolves dying.

This design uses slime block machines to push mobs off the spawning platforms, sort them, and grind them.