This article is about the area at the edge of the world. For the phenomena that existed before Beta 1.8, see Far Lands. For the customizable world border, see World border. 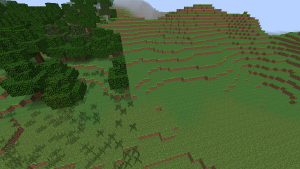 The world boundary, at 30,000,000 meters from the center of the map. Notice that vegetation is cut off at this point.

There are some strange effects that happen at and around the world boundary:

20 blocks short of the 30 million mark. Not only are the torches and their flames not lined up, but the flames each picked a different direction to bend.

Past a certain point, most blocks will stop functioning normally.

A fake swamp biome past X: 30,000,000. There is only dirt on the seafloor. It also does not generate trees and tall grass.

A mushroom island biome in the world boundary generating without mushrooms or huge mushrooms.

Trees that are generated close to the world boundary will stop being generated. Trees may also appear strange, like this.
Αρχείο:FarLandsFakeChunks.png
What the fake chunks are like (Left) compared to real chunks (Right) in an ocean biome.

After X/Z ±30,000,000, the world will start generating "fake chunks". Lighting does not function in fake chunks, appearing at level 15 constantly during the day, and 4 constantly during the night. Fake chunks are composed of a basic surface layer, and no foliage or buildings will generate. Naturally generated terrain structures like caves and ravines form as they would in real chunks, but they are devoid of all ores.

Fake chunks are non-solid; no blocks can be placed or removed, and players who enter them will fall into the Void.

The maximum possible altitude is at Y = 1.797x10308, the limit where mathematics break down in the game's code. If the player attempts to teleport beyond this limit, the game will disconnect the player with a Invalid move packet received client error. The only way to fix this is by moving a player back with an external program.

Issues relating to “World boundary” are maintained on the issue tracker. Report issues there.