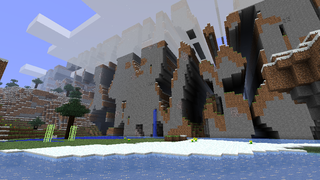 A view of the inner edge of the Far Lands. 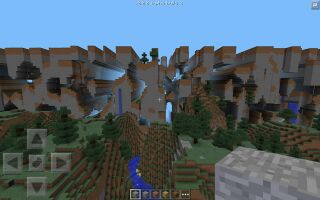 The Far Lands in Pocket Edition.

The Far Lands are a dangerous place, both for players (due to lots of darkness, hostile mobs and falls) and the device Minecraft runs on. But, if you want to go to this place, here is how to reach it and lessen the lag.

In the computer editions of Minecraft, the Far Lands can only be found in versions from Infdev 27/03/2010 to Beta 1.7. They start generating near the coordinates of ±12,550,821 on X and Z axes. Given that one block’s side is one meter long, the distance to the Far Lands from the world’s center of coordinates can be measured as about 12,551 km (7844 mi). There is no conventional way of using Creative Mode or commands to quickly reach this huge distance, since they didn't exist in these old versions. Instead, the different methods listed below are used. Methods titled in italics can’t be done in Pocket Edition.

Just walking in the Overworld towards any direction (positive or negative X and/or Y axis) is the most time-consuming way; reaching the Far Lands from the world center would take well over a month of overall Minecraft gameplay. However, it is safer than walking in the Nether and doesn't require items difficult to obtain. Crafting a bed before starting the long journey is recommended; sleeping in it before the night falls completely will avoid the annoyance of hostile mobs in the way. Crafting a handful of boats will also help crossing large water bodies. Pay attention to heights and avoid falling from them. Since hunger was not present prior to Beta 1.8, you won't need much food but only enough to restore your health in case of you losing it by falling or being hit.

Walking one block in the Nether is equal to walking eight blocks in the Overworld. Thus, by traveling through the Nether, it is possible to reach the Overworld Far Lands in just over a week. However, since the Nether is a rather dangerous dimension and many different items are required to construct a nether portal, it will take you a considerable time of trivial Minecraft play in order to obtain material and proper equipment.

When finally in the Nether and adequately protected, the player must travel a few million blocks in the X and/or Y axis. It won't be so far as in the Overworld, but it will still be a long trip. Another portal will be required to exit the Nether, so, before proceeding, it is recommended to mine all the obsidian blocks of the portal and take them with you in order to lately reconstruct the portal. Evidently, flint and steel must also be taken.

The Nether is a very dangerous place, so be very aware of mobs, lava, fire and high heights all around, and bring as much as food as you can to restore your health after the likely unfortunate events that will happen in your way. When the sufficient distance (see below) is finally reached, using the rebuilt portal will place the player near or in the Far Lands.

Commands weren’t added to Minecraft until after the Far Lands were removed, but if mods are installed (either to add commands or to return the Far Lands), it is possible to teleport players into the Far Lands using /tp or a similarly named command.

In the Nether, these commands will teleport you above the top layer of bedrock, so make sure to either teleport lower, turn "no-clip" on, use Spectator mode if possible, or a combination of them.

To not get instantly hit by loads of lag, it can be better to teleport to a few hundred meters away from the Far Lands.

External editors such as an NBT editor or MCEdit can be used to edit the coordinates of the player.

Alternately you can use MCEdit to get to the far lands, however you may die a few times before getting it right. Start Minecraft and create a new profile in Beta 1.7.3 (check the box that says "Allow use of old Beta versions"). Create a new map, walk around for a few seconds, then save and quit. Open the map in MCEdit and move the player's position to a few hundred meters from the Far Lands (so as to not get hit by the full force of the lag all at once). When doing this, it is a good idea to set the player's spawn point here, so if you die, you will be able to respawn near the Far Lands and not have to go through the whole process again (a similar method can be used in the possible situation where you spawn above or below ground.) The Far Lands' land distortion starts at 12,550,821 (x or z, although if you go for a corner where they meet expect double the lag, due to the mobs) so it is better to go to the X/Z 12,550,400-12,550,600 range. Save and quit, load up the world (in Beta 1.7.3), and as it is a new area it will be empty for a while as it loads up. Once there, it is a good idea to turn your render distance down if you have not done so already, as this will help with the lag. Once there hit F3 and check to see which direction increases the number (which will display something around 1.2550E7 because 12,550,000 is considered too long by the game to display.) You should notice strange physics immediately, however the wall of distorted terrain is still a 200-400 meter walk away (if you used the provided number range.) Once the edge of your view range hits the start of the distorted terrain you will start to get a large amount of lag. Now, you need to explore the Far Lands as much as you can before the lag makes the game too slow to play, because once you convert your map into Beta 1.8 or higher, the only Far Lands terrain you will have to explore is the terrain you generated in 1.7.3. Load your map in a newer version, and now you have the Far Lands terrain to do things to. Just remember that any terrain that you did not explore in Beta 1.7.3 will generate as normal terrain. If you want a lot of the beta 1.7.3 land to generate then once things get too laggy you can keep using MCEdit to teleport yourself 100 blocks further. After changing location with MCEdit and closing the map (Vital! You can corrupt the map having it open in 2 programs at once!) start Minecraft up, load the level, pause while looking at the sky (this lessens the CPU load) and give it a short time to process the changes (waiting until there are no chunk updates left may take too long). View distance doesn't seem to affect newly generated terrain distance (notice the explored area circle around you when using a map doesn't change when view distances change) so keep it turned down even though that seems counter-intuitive. Then save and quit and use MCEdit to move yourself another 100 blocks. Keeping either X or Z at 12,550,820 and lowering the other one by 100 each time will let you tour the edge of the wall. Increasing past 12,550,820 will let you explore the interior of the Far Lands, however the chance of appearing embedded in solid blocks is higher. You might want to consider visiting all 4 corners and mapping 1 square km around them. One last warning: do not ever change the worldspawn (the default spawn location where you appear at the start and reappear at if you die and your bed is obstructed) to a Far Lands area, either with a map editor or on later versions, cheats. The area in a 10 chunk radius around the worldspawn is always loaded, and so any lag in that area is also always loaded.

This sections covers things that can be or should be done when the Far Lands are reached.

The Far Lands are a very laggy place, due to excessive coordinates and entities; however, the lag can be lessened by the following means.

If the Far Lands are ported (see below), and the player has access to commands, the /kill @e[type=!Player,r=300] command can be used to remove excessive entities in the vicinity (use about 3 times per minute for greater efficiency; although it will kill any entity other than the players, including minecarts, paintings, potentially useful mobs etc.; 300 can be any desired distance), and /gamerule doEntityDrops false can disallow sand and gravel dropping as items (but mobs wouldn’t drop anything too). If not ported, use mods and/or multiplayer to get appropriate commands. Alternatively, if the terrain is ported, it can be possible to also perform the first command with the use of command blocks, along with a redstone clock. Also, if you are using Minecraft 1.9 or newer, you may use a command block on the “repeat” setting, along with toggling “always active”.

Additionally, the render distance could be brought down to render less of the area, which can help with the lag. Looking at the sky leaves lag-inducing entities away from the point of view, also lessening the lag. 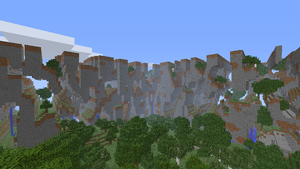