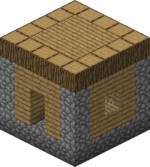 This article is about villages. For how to build the natural village style, see Village Blueprints.

Villages are groups of buildings inhabited by villagers or zombie villagers that generate naturally in the world.

Villages generate naturally in plains, savanna, taiga, and desert biomes. In Pocket Edition, villages may also generate in ice plains and cold taiga biomes. The type of the village, and therefore the style of all structures within it, is determined by the biome at northwest corner of the village well (defaulting to "plains" if it's not one of the other biomes).

2% of villages will generate as zombie villages. In such villages, all generated villagers are instead zombie villagers (that will not despawn, but have no special resistance to sunlight) and all doors and torches are missing. 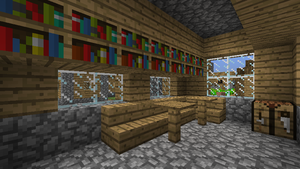 The number of buildings composing a village can vary, and not every village is composed of all buildings at once. Apart from the well, which is unique and systematic, the number of buildings of each type is randomly generated, and increased in superflat worlds. Structures are picked from a weighted probability list (libraries are more common than butcher shops). There may be fewer buildings of a given type than the maximum allowed. The number of lamp posts has no restriction, as they are generated where no other buildings can be placed. Paths are found between the buildings of the village and often extend beyond them.

The three different path types. Note the conditions required for them to generate.

Village paths generate at the level of existing terrain, potentially going up steep hills or down ravines without regard for whether an entity could actually traverse the path. Paths do not go below sea level and will only replace grass (with air above), water, lava, sand, sandstone, and red sandstone; all other blocks are ignored and the blocks underneath are considered for replacement instead.

In Pocket Edition, Cold Taiga and Ice Plains villages use the Taiga substitution.

A village is almost always composed of at least one acceptable house and one villager. In some rare cases, villages have generated with a well and nothing else (This appears to occur very frequently on console versions). Upon creation, a village center is defined as the geometric barycenter (i.e. centroid) of the active doors' locations, and the village's size is the greater of 32 blocks or the distance to the furthest door from the center. Any villager, village golem, or siege-spawned zombie will path back into the village if they find themselves farther than "size" blocks from the center.

As the villagers move around, the area near them is occasionally checked for new valid doors ("houses"). Thus, the random movement of villagers may also slowly change the center of the village they live in, even if no houses are actually changed. If a new valid door is found more than 66 blocks outside of any existing village's center, a new village is created; if a new valid door is found fewer blocks away than that, the door is added to an existing village and the center is recalculated.

The minimum population of a village is 0.35 times the number of valid doors (see Tutorials/Village mechanics#Housing). If the population drops below that point (due to death or kidnappings), but there are at least two villagers left who can reach each other, the villagers will mate and breed until the population is above the minimum.

Adult villagers can be traded with by right-clicking/using interact button on them on PC/console. Currently, trading is not in the Pocket Edition.

Note: The integer rounding in the game's internal programming may allow villages to be placed one block closer under certain circumstances, but this formula will function to keep the villages apart every time.

A player's popularity does not reset on death, and players cannot alter other players' popularity. Popularity changes only happen once, so if you attacked a villager, then brought him to a different village, you would get the -1 popularity in the first village, but not the second. Popularity is stored per village; a player may have a high popularity in one village and a very low one in another. When a player acts directly on a villager, particles around that villager will indicate the change in popularity. Conversely, because popularity is stored per village, if the entire village is destroyed, any accumulated popularity, positive or negative, is also eliminated.

If a player has -15 popularity or less, iron golems of that village will become aggressive to that player. If an iron golem is idle, it may become aggressive to the nearest player with -15 or lower popularity. However, "nearest" can be any distance at all, so if the village's chunks are loaded (perhaps by another player), the golems can turn hostile even after the unpopular player has traveled across the world.

If a villager dies to a non-mob, non-player source while a player is within 16 blocks, or if a monster kills a villager, then no villager in the village will mate for approximately 3 minutes.

Note: This video is outdated, as desert villages are made of sandstone as of 1.3.1, grass paths spawn instead of gravel, and there are slight variations in all biomes now instead of just two.

Issues relating to “Village” are maintained on the issue tracker. Report issues there.